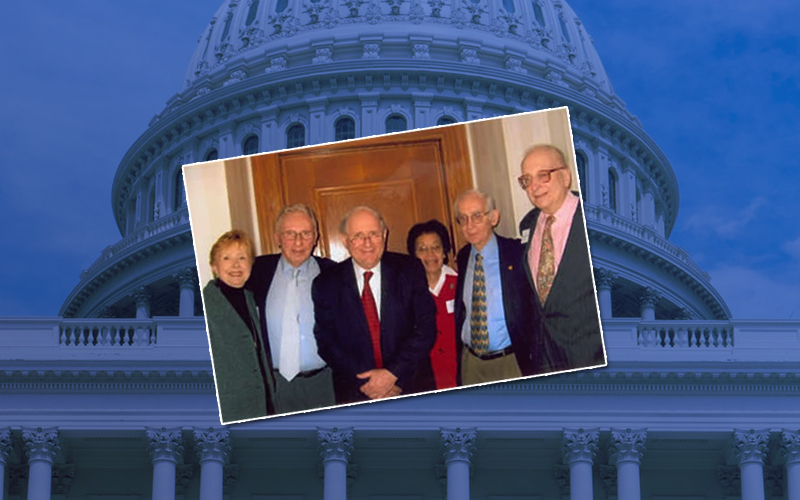 Students for Democratic Action – Then and Now, set the scene for a reassessment of the campus SDA experience as well as an analysis of liberalism today and its impact on current problems.

Interactive sessions where speakers will set the scene and raise the issues they see as compelling!

What campus issues dominated the times? How did chapters influence national SDA activities? How did SDA’ers interact with ADA? How did events beyond the campus shape SDA chapter activities?

How has liberalism changed over the years? How does it impact today’s issues (health care, immigration, Iraq, etc.) Does liberalism have a future?

Edward Hollander, a former National Director of Americans for Democratic Action (ADA) told an assembled group of Students for Democratic Action (SDA) in 1955 that the role of ADA was not to nurture, support and encourage SDA’ers to join ADA. Rather, that role was to expose SDA’ers to the best of liberal thinking with the goal that these students would embrace liberal views and take them into whatever arenas they found themselves over a life time!

The biographies of some former student members of SDA (appended) attest to how well that charge has been embraced in the 60 years of ADA’s existence.

Their theme, SDA – Then and Now, set the scene for a reassessment of the campus SDA experience as well as an analysis of liberalism today and its impact on current problems.

Those convening represented SDA during its first decade.

The first session – SDA Then: Revisiting the Past – returned to the earliest years of the organization – enabling participants to reminisce about touchstone experiences.

Al Ettinger described his leadership role in a 1949 strike at City College of NY designed to end campus segregation policies. It consumed the campus. He described the coalition of student groups (including CORE which he organized and chaired, as well as the Student League for Industrial Democracy and the American Veterans Committee, among others) which waged that strike, focusing on the destructive role of the Communist Party, a not unfamiliar pattern to those who are passionately pro-civil rights and anti-totalitarian. Participants assessed the efforts of Communist and other totalitarian groups to influence activities on other disparate campuses around the same time. This was a period in our nation’s history when the Soviet threat loomed large. ADA was founded, in part, as a reaction to Communist expansionist efforts here and abroad as well as to sustain the gains and vision of the New Deal and have it apply to a post World War II World.

Communists invariably supported anti-democratic practices that were indistinguishable from a Stalinist world view even if dressed up sometimes in the cloak of democratic language. History has largely borne this out as witnessed by the collapse of the Soviet Union and its empire.

Ettinger also discussed the relationship between SDA and ADA against the background of ADA’s supportive and welcoming attitude toward young people.

Discussing Ettinger’s presentation, Robert Trentlyon commented that there was limited Communist activity on small campuses. However, he believed that some SDA’ers among others continued to make fighting Communists their life’s work. He cited a bevy of community-based social and political organizations which embraced former student activists, noting that they illustrated how too many of them were still involved in the same old fights.

Others noted the controversies existing between ADA’ers and SDA’ers around substantive issues, citing the McCarran-Walter Immigration Act, the McCarran-Walter Internal Security Act (each vetoed by President Truman. And opposed by both organizations. The Smith Act was a separate matter, where students were active in their opposition whereas ADA did not take an official position. However, ADA was deeply involved in the fight against McCarthyism and Senator Joe McCarthy and strongly opposed the mis-guided Communist Control Act engineered by Humphrey, Morse and Kennedy.

Doug Kelley described his defining experience at Berea College which he entered as a junior transfer student from Michigan State University in the Fall of 1949. He noted that large numbers of returning World War II veterans and the size of the Michigan State campus made Berea in rural Kentucky a far more attractive college option for him. In addition, he was attracted by its philosophy and an opportunity to continue his work with rural cooperative programs.

Kelly, who served as Chair of SDA during his senior year, focused on the history of Berea as the first college to admit “Negroes” and Africans after Reconstruction. He detailed student efforts – led by the SDA chapter – to readmit Negroes after a period of 45 years during which local legislation excluded Blacks from admission. Balancing the interest in civil rights was a corresponding interest in international affairs and, specifically, the plight of blacks in rural areas of the third world. This is one example demonstrating ADA and SDA’s strong commitment to civil rights including fighting segregation in public facilities in Washington and Baltimore.

The subsequent discussion focused on how different people have different perceptions of the same event. Robert Trentlyon related the work of the American Committee on Africa as a discussion turned to George Shepherd and Peter Weiss and the brief existence of the Africa League as a corresponding organization to ACOA.

Sam Perelson, who served as SDA President from 1955 – 56, briefly discussed the emergence of Baruch College of the City University of New York (CUNY) from the “downtown” branch of City College with a relatively small student body into a college of 13,000 students, perhaps the most diverse among the City University with students speaking more than 100 different languages.

David Cohen (Temple University) led off the afternoon session with an analytical discussion of liberalism with an emphasis on how its belief that government plays a critical role in resolving social and economic problems affects livelihood issues like decent incomes, health care, immigration and the environment. Government has a key role in establishing policies that distribute equitable resources in our equalizing institutions—education, health, housing, transportation and others. (The previous evening after a dinner featuring former SDA members Carl Levin, Sandy Levin and Sandy’s son, Andy, the group lamented on the reluctance of forward-looking people to use the term “liberal” today! Since the 1976 presidential campaign increasingly the term “progressive” has replaced use of the term “liberal.”)

Taken together these simple and straightforward concepts combine the critical importance of negative and positive freedoms so well thought through by Sir Isaiah Berlin. Here the effort is to put them into a US context in a globalized world.

Negative freedom means a whole hearted commitment to civil liberties and a defense against the erosions of the First Amendment (today by the Patriot Act) and the whole Bill of Rights.

Positive freedoms have their underpinning in the post Civil War Amendments especially equal protection and voting rights. These are encompassed in the Civil Rights Act of 1964 and the Voting Rights Act of 1965 and subsequent amendments thereto.

The plenary power of Congress to legislate on matters affecting interstate commerce enables us to address issues of equity, and fair distribution of public benefits and resources, if we have the political will to do so. It is the very basis of the New Deal and the social legislation that has followed.

Both positive and negative freedoms are needed. They reinforce each other.

Today, there is, increasingly, a rights-based approach with a focus on democratic governance. It recognizes the interrelationship among political, civil, social, economic and cultural rights. They are influenced by countries in Africa, Asia and Latin America. It recognizes that together these are human rights that require political and policy solutions within countries and internationally to be made operational. It deals in the USwith, how to make our governing institutions accessible, accountable, responsive and effective to “we the people”, the preamble to our Constitution.

Cohen sees the Bush administration as representative of a “failed” state like many in other parts of the world. The US failure in Katrina epitomizes the failed state in the US. The US needs to stop being insular and recognize that too many parts of our country are not different from Third World situations.

For Cohen, the overarching challenge is to move away from constantly reacting to events and begin setting of our own (positive) agendas in the political and policy arenas and with like minded people internationally..

However liberalism, for many present, means protecting individual rights under the first amendment. It also means supporting reform programs extending material benefits as far as we can! And, it means looking at globalization issues and resetting our priorities in that context.

Marvin Rich identified the today’s major issues as the war in Iraq, Health Care and Immigration. As the discussion evolved, this list was expanded to include economic issues (the gap between rich and poor, minimum wage, family care) in the context of Globalization.

Jerry Anker noted that globalization helps overseas workers but Rich countered noting his uncertainty about the results of NAFTA. Sue Rosenthal asserted that education may well hold the key to many problems globalization generates – particularly its impact on the U.S. economy – while noting that we seem to lack the political will to address basic education issues.

Evie Rich noted the extraordinarily large salaries of many of today’s labor leaders and the resulting inability to identify with the workers they represent. She also identified an unwillingness for older Americans to go beyond letter writing in addressing and shaping the issues of our time.

Trentlyon commented that ADA today tried to address two conflicting issues simultaneously, arguing that one cannot take positions on the one hand yet engage in politics regarding those issues on the other.

Cohen commented on the actions of legislators opposing the Supplemental Appropriations bill in the House of Representatives. Their action in opposing this legislation, for the stated reason of opposing funding for the Iraq War, played directly into Bush’s hands. If they had succeeded they would have prevented Congress from institutionally setting a deadline to withdraw our troops from Iraq. To have failed to do so permits Bush to escape accountability from Congress by not vetoing the Supplemental.

Cohen noted that Reinhold Niebuhr, the “patron saint” of ADA, taught us that politics always gave us choices. These choices rarely embrace a perfect “right” or “wrong.” That imperfect choice was the choice in the Supplemental. We should recognize on this issue the outstanding leadership of Speaker Pelosi and Majority Leader Reid..

He noted that newly elected Senators mostly voted against cloture on the recently-defeated Immigration bill. In setting the agenda Cohen stressed that we must amplify voices not usually heard.

Finally, the group agreed that we need to focus on those issues where we agree with the U.S. public. Those issues are the Iraq War, Health Care and stem cell research. Simultaneously, we need to support as a presidential candidate for 2008 the candidate who can take us further on issues where there is clear disagreement.

Many of us left with Trentlyon’s unanswered question/comment in mind – namely, how did membership in SDA affect our ability to provide leadership on the issues of the day as they evolved over the ensuing years.